The creation of a composition between the visible and the panchromatic data is shown, using an image recorded in November 2002 from the sensor Landsat Enhanced Thematic Mapper Plus (ETM +) on Landsat 7 satellite platform, covering the Italian region Puglia.

The ETM multispectral sensor allows measurements for various bands with different accuracy on the ground:

The greater panchromatic sensor accuracy is due to the ability to collect more reflected energy because of its bandwidth (visible and near IR). Clearly, the signal generated by the panchromatic sensor contains only the information of light intensity, without distinction of color tone.

However, it is possible to integrate this data with the information coming from the three bands in the visible spectrum (bands 3, 2 and 1) so as to obtain a representation having the geometrical precision of the panchromatic band (15m) and the color (tone and saturation) of the other multispectral bands.

Into practice, the following procedure has to be followed:

Compare the following pairs of pictures, with the first ones obtained using the three visible bands (Red, Green, Blue - bands 3,2,1), while the second ones made using also the panchromatic band as intensity data (I - band 8 ).

As may be seen, the last containing a higher geometric information and allows to read better the structure of the territory. 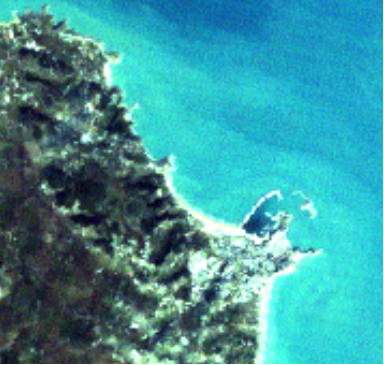 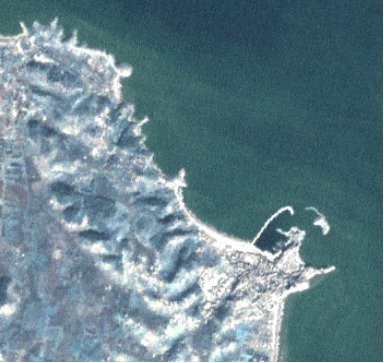 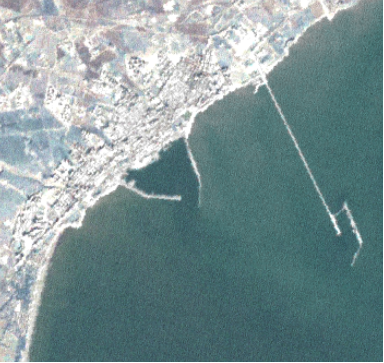 Unless otherwise expressly noted, content on this site is available under the license Creative Commons Attribution 3.0 (CC BY 3.0).

2021 Analisi Territorio - All Rights Reserved. Designed by Devpri
This site collects anonymous statistical data on navigation through the use of cookies, including third parties' ones, while respecting privacy of your personal data and according to the norms prescribed by law. By closing this banner, scrolling this page or by clicking any of its elements, you consent to the use of cookies. If you want to learn more or opt out of all or some cookies, please consult the policy page.
Cookies policy